Arts & Culture
Organized by JFKL Talks/Conference
JFKL Talk Series is new a programme initiated to reach out to everyone and introduce more about Japan through the lenses of professionals in various fields. Through this programme, we hope that it is able to showcase the charms of Japan and instil curiosity on the multifaceted culture of the Land of the Rising Sun. The episodes of this series will be streamed live on JFKL's official Facebook page. Make sure to like and follow our Facebook page to get notified when we go live!   EPISODE 3
Friday, 25 March 2022, 8:00 PM via FB Live

The third episode of JFKL Talk Series is titled “An insight on the “Butoh” art form in Malaysia” by Mr. Lee Swee Keong, a "Butoh" practitioner and pioneer of the art form in Malaysia. This episode will also be featuring guest speakers Lena Ang and Dr. Richard Chua.

Title: An insight on the “Butoh” art form in Malaysia
“Butoh” is a Japanese art form that has significantly influenced Malaysia’s dance scene since the early 1990s. In Japan, this art form rose to prominence in the late 1950s, which is known to be one of the most important movement in arts history. It encompasses a diverse range of activities, techniques and motivations for dance, performance, or movement. In this episode, we will be exploring “Butoh” in the Malaysia context with Lee Swee Keong, the pioneer of “Butoh” in Malaysia who has dedicated years to learning and teaching this art form.

About Mr. Lee Swee Keong
He is the artistic director of Kuala Lumpur BUTOH Festival (2008 - 2019) & Nyoba Kan Butoh. In the thirty years of immersive experience in the performance arts, Swee Keong has travelled widely around the globe with his art. Progressing from contemporary dance to ballet to a diverse range of traditional martial arts and different forms of physical training, especially in Qigong, Taichi, Butoh and Yoga, he developed Dhyana Dance (Dance of Mindfulness), through delving further into buddhism. Dhyana Dance is a combination of Qi and Quietude, that induces even the audience watching the performance, to heal together. In that same regard, he establishes Mindfulness theatre focusing on Meditative performance. By that right mindful spirit and intention, he has created EARTH WOMB 地藏, MASQUE OF REVELATION 四面观音 GREEN SNAKE 青蛇, SPIRITS PLAY 灵戏 & etc.
EPISODE 2
Sunday, 31 October 2021, 3:00 PM via FB Live

The second episode of JFKL's Talk Series is titled "An invitation to the subtle beauty of Japanese Literature and the World of NATSUME Soseki" by Dr. Leong Yut Moy, a Japanese literary researcher in the School of Media, Languages and Cultures, University of Nottingham Malaysia.

Title: An invitation to the subtle beauty of Japanese Literature and the World of NATSUME Soseki
This talk provides an overview of Japanese Literature in various forms including prose and verse, and a glimpse into the world of one of the most widely acclaimed Japanese national writers in the Meiji era, NATSUME Soseki (1867-1916). Not only did the everlasting “I Am a Cat” and “Botchan” fascinate readers in the Meiji era, but they also continued to gain their popularity in modern days while serving a special purpose in his quest of expression.

About Dr. Leong Yut Moy
Dr. Leong Yut Moy is a Japanese literary researcher in the School of Media, Languages and Cultures, University of Nottingham Malaysia. She earned her MA and PhD in Japanese Literature from Hiroshima University, Japan. Her main literary research focuses on modern Japanese Literature in Meiji era, and comparative studies between NATSUME Soseki, English and German writers. She has also been involving in various forms of Creative Writing such as short novels and poetry in Chinese and Japanese, as well as literary translation published in Gendaishi Techō (Japan). Her award-winning poems have been selected in the World Poetry Almanac two years consecutively.
EPISODE 1
Sunday, 25 July 2021, 3:00 PM via FB Live

The first episode of this inaugural talk series is titled “Longing and belonging: Portraits of different people in Japan” by Mr. Mahen Bala. Mahen is a Malaysian documentarian and visual artist who has worked on documenting Malaysian culture and history for more than a decade.

Title: Longing and belonging: Portraits of different people in Japan
In early 2020, I arrived in Japan on a research trip to explore railway heritage and history from the Japanese perspective. It was an opportunity to observe how train travel, museums, and railway history defined national and communal constructs of identity across the Japanese landscape. In this light-hearted talk, I will share my research findings, the places I visited, and most importantly the people I met. Among many others, I will tell you about my most treasured souvenirs and who gave them to me: the red plastic folder, the polka-dotted paper crane, and the golden manekineko from a ramen shop. After more than a year of lockdown and travel restrictions, I hope this lighthearted sharing session will remind us of the magic of connecting with strangers, and in the process, discover new insights into Japanese culture and history.

About Mahen Bala
His primary interest is in investigating the human experience, and how memory shapes personal and communal constructs of history. In 2018, he published ‘Postcards from the South’, a comprehensive documentation of memory and history of the Malaysian railways. In 2020 he completed a Fellowship with the Japan Foundation Asia Center, and is currently pursuing his Masters at the University of Malaya. 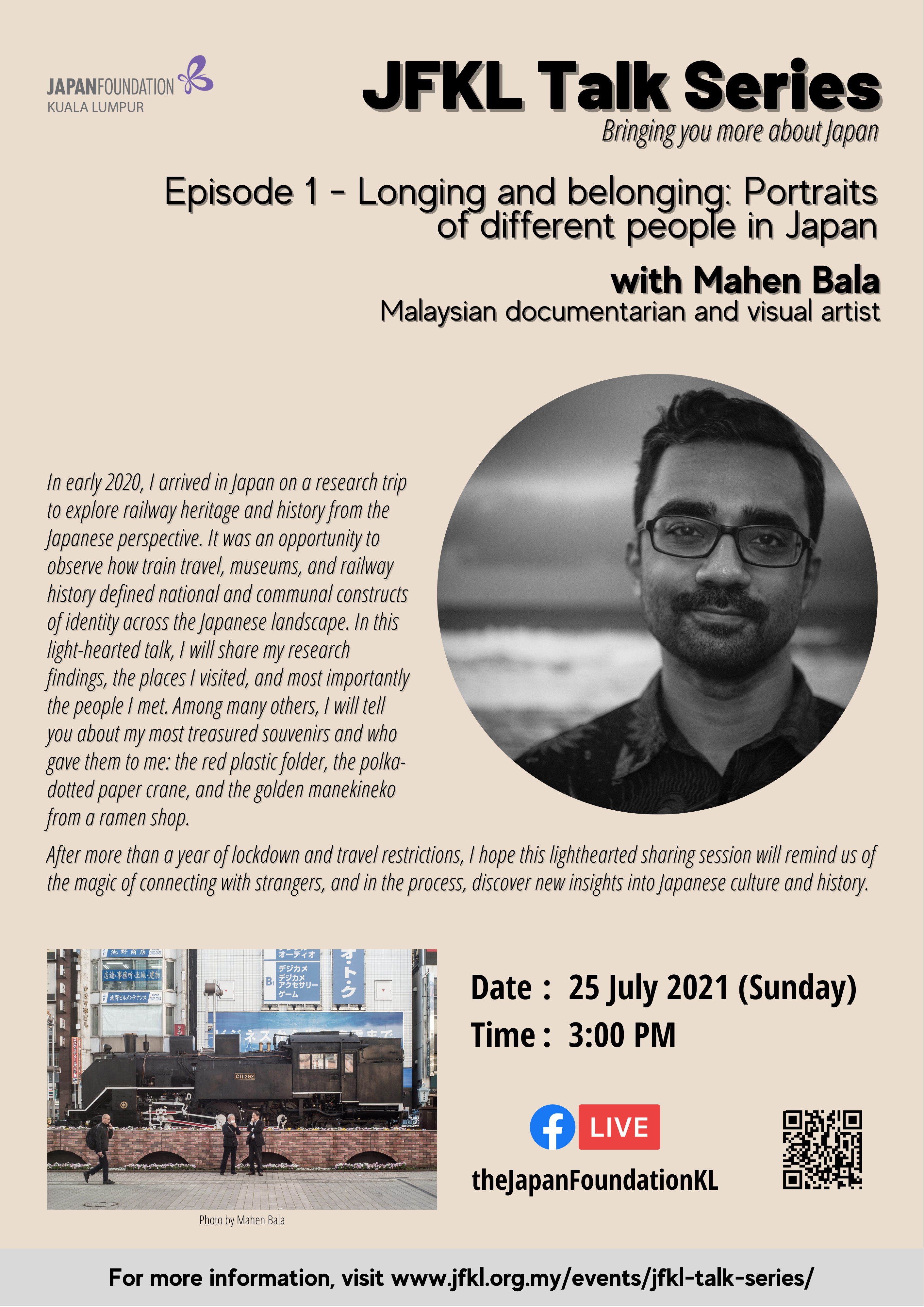